Graphviz just released a patch to a critical security issue I reported to them.
The following is the advisory:

Graphviz is an open-source multi-platform graph visualization software. It takes a description of graphs in a simple text format (DOT language), and makes diagrams out of it in several useful formats (including SVG).

A vulnerability exists in Graphviz's parsing engine which makes it possible to overflow a globally allocated array and corrupt memory by doing so. As it can be seen, no bounds check is performed by the push_subg procedure, allowing one to overflow Gstack by pushing more than 32 (Agraph_t *) elements.

A malicious user can achieve an arbitrary code execution by creating a specially crafted DOT file and convince the victim to render it using Graphviz.

Below is a screenshot of a successful exploitation. When the  malicious DOT file is rendered, a shellcode which calls the MessageBoxA API is executed: 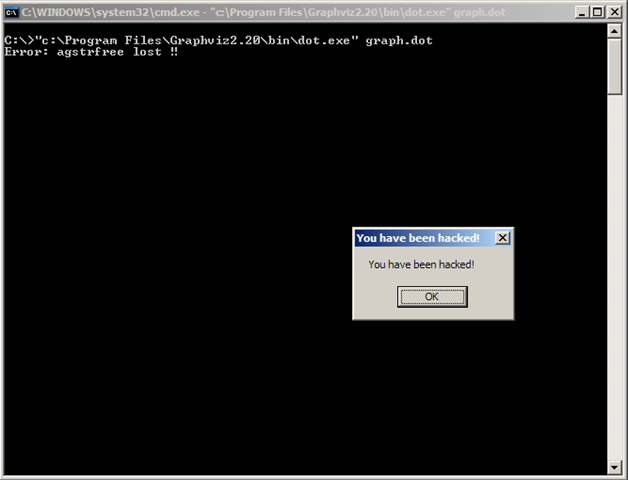 Graphviz 2.20.2 is affected by this vulnerability. Older versions are probably affected as well.

I would like to thank the Graphviz team (Stephen C. North, John Ellson, Emden R. Gansner and others) for their quick responses and fix (it took them only a day since my disclosure to release a patch!).